The relevancy of Bond County as an early Midwestern genealogical research site, may be viewed from the stand point of its historical linkage to statehood development and the early development of transportation access within its present county lines. Originally a part of Madison County, Bond County was one of the few earliest counties established in the transition of the Illinois Territory into statehood in 1818. Within its formation in 1817, the county was a vast land area extending to the shores of Lake Superior and included a large portion of the present State of Wisconsin. Many central and northern Illinois counties were later established from parts of this original Bond County.

The major early roads provided important national and regional migration routes for populations from diverse locations, as well as access for transportation of regional agricultural products destined for the St. Louis markets. Those roads included the western extension of the Cumberland Road now parts of which are State Route 40 and a north-south road later called the Black Diamond Trail, now State Route 127.

Early county settlements were established along or near the travel routes and much information may be found of those early residents. The origin of the early residents reflected the diverse migration patterns gripping the plains. Some came from eastern states of New England and Virginia others from Kentucky, Tennessee, and the Carolinas. Unfortunately, the identity of the very large immigrant population is unknown and the road sides became some of the county’s earliest unmarked graves.

The earliest records of the county are from the 1817 temporary county seat at Hill’s Fort, and Perryville the first Bond county seat. Both settlements have long since been abandoned and the Perryville site is now located in Fayette County. Other early information pertaining to Bond County has been located in the State Archives in Springfield, Illinois and the National Archives in Washington, D. C. These records include military records and the first land survey.

Records were moved to the present county seat, Greenville, Illinois in 1821. These records moved from various courthouse buildings until the present structure was built. They survived a fire which destroyed the third Bond County Court House in 1883. Fortunately, it appears most of the records were saved. Records from required years are complete with the exceptions of a 1879-80 gap in the Bond County Marriages. Original county records and documents are now located in the Bond County Circuit Clerk’s Court House Office.

In 1981 the Bond County Genealogical Society was founded to preserve, research and disseminate the genealogical heritage of Bond County. Over the years the society has developed a collection that now contains over one thousand volumes. The volumes include numerous works relating to the records residing in the County Court House. Volumes of family histories, village histories, and church histories have been donated directly to the society by members and the community. In addition to these books and files are numerous microfilms containing pertinent census information and county newspapers.

Past BCGS members have contributed so much to the organization and its collection. Even after they have passed away, their legacy is remembered and valued by the next generations. We’ve created a page specifically recognizing their lives and their work to further family research in Bond County. 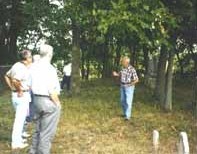 Throughout the years the Society has sought to exemplify the ideals set forth in its mission statement. They have been active in preserving the genealogical heritage of the community through the diligent creating of books and copying of records. The Society consistently has two or three members at work on books and other projects. The result of this labor has been the creation of the large and valuable Genealogical Library located at the Greenville Public Library. Volumes of these books now reside in other libraries as well including the Mormon Library and the Library of Congress.

However all of their work does not take the form of research and typing. The Society has offered tours of cemeteries and burial grounds as part of many community festivals and events. On these tours visitors from age eight to eighty learn stories of their ancestors. Veterans of every American war, farmers, college presidents, and powerful businessmen come to life as their stories are told at the place of their final rest. Along with these stories tourists learn the science of Genealogy. Stories of long and tedious hours of research mingle with the joyous tales of how a tiny fact complete a family and a genealogy. 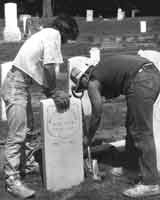 One of the Society’s proudest story is that of the cemeteries themselves. In the mid eighties it came to the attention of the society that most of the county’s eighty-five burial grounds and cemeteries were is horrible disrepair. Many were strewn with broken stones, a testament to mowing machines and vandals. Seeing this as a disrespect to the memory of those who had founded Greenville, the Society approached the City Council for help in a restoration project. The Council agreed to help and soon volunteers from the Society and community began to converge on one of the oldest cemetery in the city. 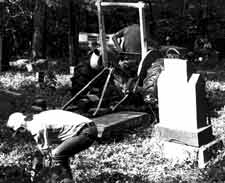 Known to most as Old City Cemetery, the small burial ground on the west side of town was the final resting place of Greenville’s earliest settlers. Years of neglect and vandalism were slowly removed by the hands of the volunteers. While some volunteers scoured the ground for broken pieces of stones, other went about the task of cleaning and resetting other stones. Still other workers began cataloguing the names of those buried in the cemetery. Among the facts discovered was that of Mr. Lansing’s sale of the cemetery to the city for $1. Befitting this generous act the cemetery was named Lansing Cemetery.

Due to the large number of veterans buried in the cemetery, the Society went about ordering official stones from the Federal Government for creation of a memorial to their sacrifice. The ordering required extensive research to find the service records of the deceased. Once the stones were received they were set in stately rows surrounding a flag pole bearing Old Glory. This simple memorial set on the edge of the cemetery facing the road, stands as a reminder of the sacrifices made by Bond County in this country’s wars.

The back breaking and at times tedious work progressed throughout the spring and summer and into the fall. As memorial day approached the following year it was apparent that the project would be completed in time for festivities. That May an old tradition was reinitiated as the VFW and other veterans marched from the VFW post to Lansing Cemetery on the city’s west side. Over three-hundred people turned out to hear local dignitaries speak and to join in remembrance.

Invigorated by this success, the society continued to repair and clean cemeteries until all in the county were catalogued, cleaned, and open to those wishing to pay respects to their ancestors.

For this labor of love the Society was honored by the State of Illinois. Every year the state awards groups who improve their communities with volunteer service. In 1990 the award went to the Society. President Anthony and his wife were on hand to receive the award. Also receiving awards for their exemplary service to the community, were the coordinators of the local JTPA program. This summer youth program and its advisor had provided a large portion of the labor involved in repairing the cemeteries.

Gerald “Speed” Jenner received a Service Award from the Greenville Women’s Club during Apple Day October 6, 2012 for his many years of community service. Jenner had worked with the Bond County Genealogical Society in locating and restoring several old cemeteries. He wrote a book, The Story of Old Mt. Nebo and the Families Buried There. Proceeds from the book go to the cemetery and have paid for not only repairs to tombstones but for the payment of cemetery upkeep. Another publication of Jenner’s is Mt. Gilead Cumberland Presbyterian Church & Cemetery History, 1819-1993. Both books are available to read and study in the Bond County Genealogical Society research library. Jenner was a long-time member of the Greenville Kiwanis Club and was instrumental in starting a project to save the Ripson Bridge near Sorento, Illinois. He served as a director of Bond County Historical Society for many years, resigning only in 2015 when he was disappointedly no longer able to attend meetings. Jenner served as Treasurer of Bond County Genealogical Society in its earliest years, spent many years on the BCGS Cemetery Committee and remained a Director Emeritus until his death in 2019.

All is not hard work however for the Society. Every year the society gathers for its annual dinner. Many times they have gathered for a potluck on the lawn of one lucky Society member. In past years it has been held at the building where they hold their meeting, and in recent years the dinner has been combined with the Bond County Historical Society’s annual autumn dinner and election. Each dinner is highlighted by some form of entertainment, whether it be an address by Abraham Lincoln, Calamity Jane, Amelia Earhart, an authority on the Underground Railroad, or a musical group from the community. Above all it is a time for the members to fellowship and to look back at the year past and what has been accomplished. In September 1996 the Society started an annual bus tour of Bond County cemeteries and historical sites which later evolved into a self-driving field trip preceeded by either a potluck picnic or restaurant dinner.

The more regular activities of the society take place on the fourth Thursday evening of every month. BCGS meets jointly with Bond County Historical Society at 7pm in the Bond County Museum (U.S. DeMoulin Mansion, 409 S Fourth St, Greenville). All members and visitors are welcome to attend the monthly meeting and look forward to hearing or proposing a program of some sort. Members will often speak of their respective projects. Special program meetings and tours may take place at other locations and times, so follow our Facebook Page, listen to WGEL 101.7 FM, or subscribe to our Announcements Mailing List by sending us an email with that as your message. 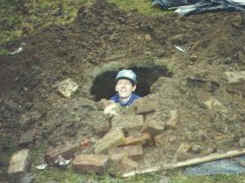 One summer the society was privileged enough to learn from Dave Beeler and Dave Warren, the fine art of privy digging. In a time before weekly garbage pickup the privy was often the final resting place of many broken artifacts of the day. The diggers scout out possible privy locations and then dig, hoping to discover a treasure or two. One such treasure, a ironstone chamber pot was proudly displayed in the Society president’s house for many years.

As you can see, the Society is a thriving community oriented organization, actively pursing the science of genealogy while educating the community as to its importance. If you would like to become involved in the society please check out the membership part of this website. We would love to have you.